The Dreamers is story that intrigued me from the beginning. A virus spreads through a small town in California where people go to sleep, and don’t wake up. They are still alive, but only survive with medical intervention such as IV fluids and feeding tubes. The novel opens up in a college dorm room, where patient zero stumbles into her dorm room after a night out, and doesn’t wake up again in the morning. I am a big fan of post-apocalyptic novels, and this one was right up my alley. It is fascinating to wonder what people would do if their world suddenly turned upside down and became a dangerous place.

The key theme in this novel was not survival. There really was no way to survive the virus or protect yourself against it. The key theme is humanity. How do people deal with a crisis? Some people in the book hide themselves away, some people help others. Another key theme is dreams. People who had the sickness dreamed, and people who were not sick dreamed. Some people dreamed of their future, some of the past, and some felt like they lived another life in their dreams, when in reality it had only been a few days. The author’s writing about their dreams is beautiful and one of my favorite lines of the book was towards the end, when discussing how the differences in people’s dreams were “as if each dream contained its own unique physics.”

My favorite character in the novel was Mei. The author accurately captured the awkwardness and vulnerability of being a college freshman and not quite fitting into dorm life. I felt sorry for her and wanted to be her friend, all at the same time. It would have been interesting for the entire book to be told from Mei’s point of view.

One part of the novel I found challenging was the short chapters. They made it easy and quick to read the novel. However, it was especially confusing in the beginning, with each chapter shifting back and forth between different characters, frequently. It wasn’t until halfway through the novel that the main characters were apparent, and more character development took place.

The book ended with many of my questions still unanswered. The author gives multiple possibilities and reasons for the dreams; why some people woke up and some didn’t. It’s left up to interpretation by the reader. The novel felt too short to me. I enjoyed reading it and wished it was a bit longer.

I would recommend this book to anyone who likes post-apocalyptic fiction and general fiction. It was an excellent story full of how good humanity can be in a crisis. I would definitely not recommend this book to anyone with severe germaphobia. It’s stories like these that remind us how vulnerable our bodies are to sickness and disease. It’s impossible not to compare the Santa Lora Virus to viruses like the flu, ebola, measles, whopping cough, etc. It’s a little too real, and feels like it could happen in the real world.

I would like to thank NetGalley and Random House for an advanced copy of the e-book in exchange for an honest review. This book is available today, January 15!!! Get your copy on Amazon (click on the image below):

My favorite genre of books is thrillers, therefore I am always on the lookout for new ones. I had seen Anatomy of a Scandal by Sarah Vaughan advertised several times on e-mail lists I receive, such as Off the Shelf. It was advertised as “the most explosive courtroom thriller you’ll read this year.” I haven’t read a courtroom thriller in a while, so I was intrigued. I was called to jury duty at the end of September this year, but wasn’t chosen after a day of waiting around the courthouse. Still, it peaked my interest in learning more about the justice system. 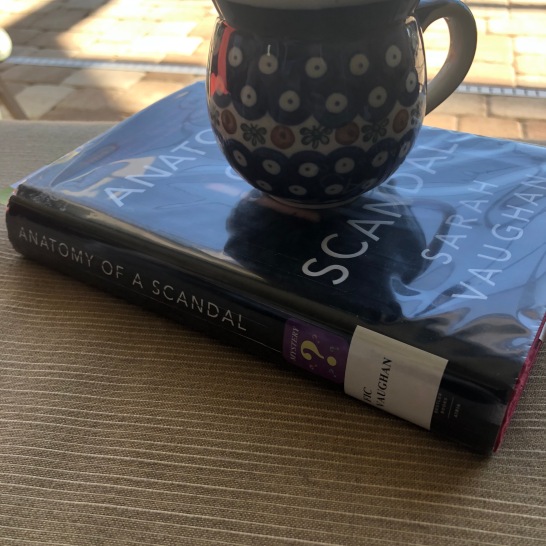 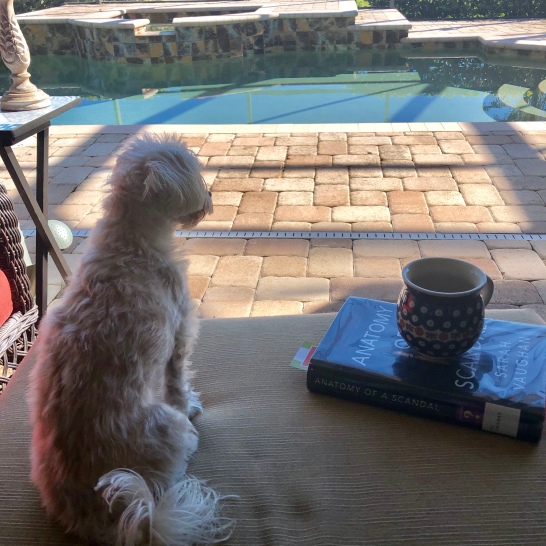 The story alternates between four character’s perspectives (Kate, Sophie, Holly, and James), as well as alternates in time between modern day London and Oxford University in 1992-1993. I was pleasantly surprised by these settings because I originally assumed that the novel takes place in the United States. The location added an extra element of intrigue for me, because I love thrillers set in London and England, in general. English thrillers are full of descriptions of the rain, the tube, and the endless cups of tea to deal with the stressors of life. It is the perfect, cozy setting for a thriller.

I myself attended university in England in the mid-2000s, so I could relate to the university life described in the novel. It brought back some good memories for me of my own university studies, and I enjoyed re-living the days when I studied physics in rainy York in northern England. That first formative year of university life can be traumatic and life-shaping, and Sarah Vaughan accurately captured all those emotions in her characters of Holly and Sophie. The reckless privilege enjoyed by young males is accurately captured in the character of James.

The first 50 pages or so of the book contained a lot of legal jargon and switched frequently between several different characters, making it hard to get into at first. I wasn’t quite sure if I wanted to continue to read it with so many other books on my TBR list. Maybe I was a little distracted when I first started reading it. However, I told myself to pick up the book one more time and give it a go. If I couldn’t get back into it, then I would quit. I picked it up again and that’s when things got juicy and I was hooked. It was the storyline going back in time to explain some of the characters’ backstories that hooked me. I’m glad I gave it another chance.

Sarah Vaughan wove a believable and timely story with this gem of a novel. Her strength in story telling was most apparent in her telling of life at Oxford University. I was not surprised to flip to the back cover biography and see the author had attended Oxford in the mid-90s. For readers in the United States, and other international readers with an interest in US politics, this story hits close to home and reminds me of the recent Supreme Court Justice Brett Kavanaugh scandal. As I watched Dr. Christine Blasey Ford give her testimony in early October, I wondered what other bad deeds Kavanaugh had gotten into during college. This novel explores a Brett Kavanaugh type of character and how those college years were just a precursor to bad behavior later in life. And it asks the question, why are men allowed to get away with such horrible things?

I know this novel is advertised as a thriller, but after reading it, I’d say it’s more of a piece of feminist fiction.  Maybe it’s a new genre we all need in the #MeToo era: feminist thriller? I enjoyed the strong female characters, as well as the alternating time frames. I think this would be an excellent book club pick for people who are interested in the scandals that often rock the political world. If you followed the Kavanaugh case as closely as I did, then you will enjoy this novel. I give this novel a 4 out of 5 stars, and am looking forward to reading Sarah Vaughan’s next novel coming out in 2019.

Buy the book on amazon: